A new, reliable source of information on breast cancer surgery choices  _ from going flat to undergoing immediate or delayed breast reconstruction _ that you can read on your phone debuted today.

The app, two years in the making, is for iPhones; an android version is coming later in September, according to the app’s creator, Dr. Minas Chrysouplo, a leading breast reconstruction surgeon.

He and his San Antonio team gathered suggestions and input from dozens of breast cancer survivors, previvors, doctors, health care workers and writers, including Patricia Anstett, author of “Breast Cancer Surgery and Reconstruction, What’s Right for You.” 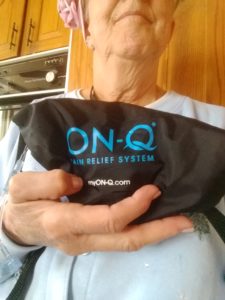 Detroit breast cancer survivor, Dr. Linda Johnson, is shown here with the “On-Q Pain Relief System, which she used to reduce post-operative pain after breast reconstruction. It is a non-narcotic system. “This is a little pump about the size of a small can of soup that contains pain reliever that comes into your system automatically for a few days after surgery,’’ says Johnson, a retired school principal. “The pump goes to a tiny plastic tube that the surgeon installs in your chest. This little dickens really worked!!  All I had to do was to carry it around in the little nylon bag shown in the picture.  By day I used it like a shoulder bag and at night I just kept it beside me in the bed. The doc will take out the 4 or 5 inches of tubing that went into my body when I go for my check up next week.  Easy breezy, it gives a constant stream of pain relief, and doesn’t involve pills.” For details: http://www.myon-q.com/why-on-q.aspx

Experts say surgery, not observation, is best for cancer confined to milk ducts
CONSUMER.HEALTHDAY.COM
This is an issue we are following on MRI tests in breast cancer detection.  The trend grows, despite lack of guidelines, this report says. Free link at end to the abstract.
By Shreeya Nanda, Senior medwireNews Reporter
JAMA Oncol 2015; Advance online publication

From 2003 through 2012,  preoperative MRI was used in 3% of women with a primary diagnosis of breast cancer who underwent breast-related surgery within 3 months of diagnosis. By 2012, the test use increased to  24%, a significant eight-fold increase that was observed across all disease stages, researchers said.

MRI use was higher among younger and more affluent women as well as those with advanced disease. MRI use also was higher at teaching hospitals, the study found. It analyzed data on 53,015 women from the Ontario Cancer Registry.

Specifically, women who did compared with those who did not undergo MRI had a 2.52-fold increased likelihood of a greater than 30-day wait for surgery. The odds of undergoing mastectomy and contralateral prophylactic mastectomy were also higher, at 1.73-fold and 1.48-fold, respectively.

The researchers noted that the observed increase in pre-operative MRI use is despite the lack of guidelines supporting its routine use and a lack of evidence of benefit it leads to short- or long-term surgical or oncological outcomes.

“Because the authors did not report MRI results (eg, if the MRI was interpreted as positive or negative), the extent to which the MRI might have influenced additional tests or more aggressive surgery is not clear.”

They also point out that Arnaout et al could not control for factors such as the capacity to offer breast reconstruction and patient genetic mutation status, which reportedly have a significant impact on treatment decision and “could be overrepresented in the MRI cohort.”

Rahbar and Lehman conclude by suggesting that future research could explore the role of MRI in novel treatment approaches, such as identifying patients eligible for multiple lumpectomies or for lumpectomy without radiation.

“It is this role in precision diagnostics and risk stratification that advanced imaging techniques may hold the greatest promise, and

for which MRI should be studied in future prospective trials.”