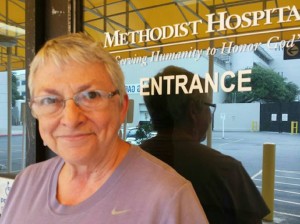 Patricia Anstett is an experienced medical writer who worked 40 years in newspaper journalism in Chicago, Washington D.C. and Detroit, her hometown. For the last 22 years of her professional newspaper career she was a medical writer for the Detroit Free Press, retiring in September, 2011. In 2017, she was inducted into the Michigan Journalism Hall of Fame, and she was named Headliner of the Year by the Association for Women in Communications. In April, 2019, she was named an outstanding alumni of Michigan State University’s College of Communication Arts & Sciences.

Breast cancer has been a dominant focus of her career as a medical writer. Her award-winning stories covered large pricing disparities and poor quality at Detroit area mammography centers; the silicone breast implant controversy of the 1990s; lumpectomy and radiation advances; tissue-transfer methods for breast reconstruction; and the growth of services, including genetic counseling and preventive surgeries, for women with a high risk of inherited breast and ovarian cancer.

State officials credited improvements in compliance with mammography inspection standards to her front page story in the early 1990s about how two-thirds of Detroit-area mammography facilities flunked a state inspection. For more than 10 years, she kept attention on centers failing the inspections or charging high rates with an annual mammography guide she produced with the American Cancer Society.

Her reporting on breast implants dates to 1989 when early complaints surfaced about the devices. She covered federal hearings that led to a moratorium on silicone implants in 1992. The American Society of Plastic Surgeons, the largest group of board-certified specialists in the field, honored her work in 1995 with an unsolicited national award.

Her reporting on breast health issues earned the Vivian Castleberry Award, a national competition honoring top reporting on women’s issues, for her coverage of new breast biopsy options.  The American Cancer Society and the Barbara Karmanos Cancer Institute each have given her awards for the accuracy and comprehensiveness of her breast cancer reporting.

Anstett’s reporting has won national, state and local awards for breaking news, beat and feature writing. She has been honored as Journalist of the Year, Detroit chapter, Society of Professional Journalists, and received the top Headliner award from the Detroit chapter of the Association of Women in Communications.

She is the co-author of “Triumph: Inspirational Stories from the Beaumont,” published in 2014 by the Beaumont Health system.

Her freelance articles have appeared in the Reader’s Digest; the National Observer; the Chicago Tribune; Washingtonian magazine; and Paris Match, with a cover-story about secret trips former French Prime Minister Francois Mitterrand made to Detroit for more than a decade for prostate cancer treatment.

To promote key messages in the book, Anstett has held more than a dozen public forums on the topic of breast surgery and breast reconstruction, featuring her as a moderator posing questions to top breast and plastic surgeons, breast cancer survivors and previvors with a high risk of breast cancer. She also created five videos for patients with the same format, available on her web page.